Nature vs Nurture:
Does the Dobermann have the Answer? 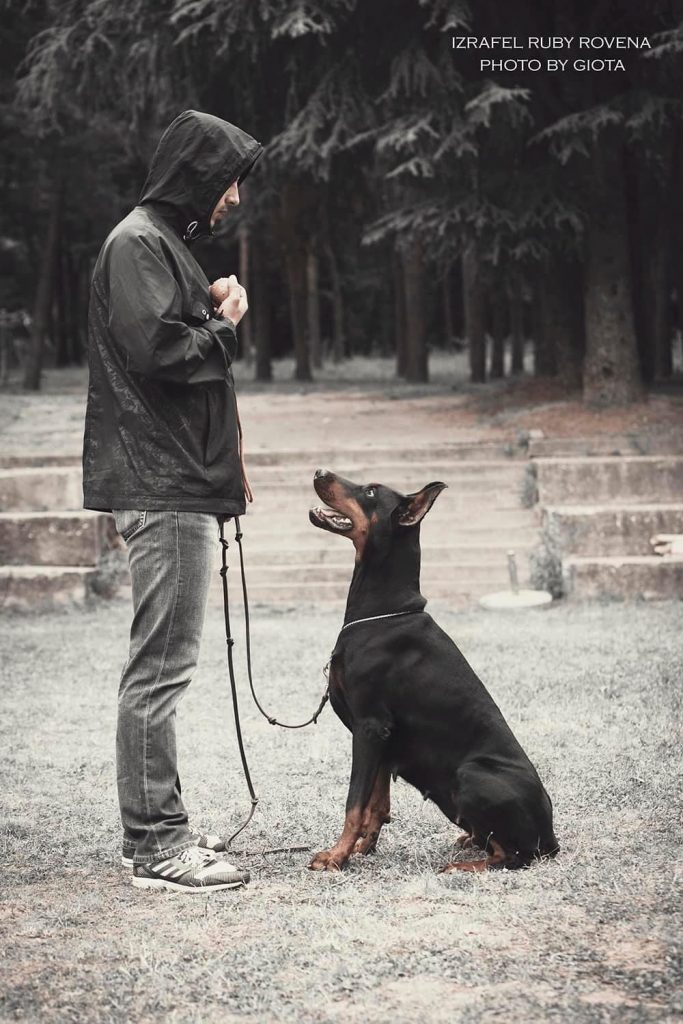 To be a great breeder I think you need to have a deep and genuine interest in genetics as a whole .. as it is widely known, in my youth I studied experimental psychology at Cambridge.. one of the never answered and continuously discussed questions that spans across many other sciences is that of nature versus nurture. As a scholar I was of the opinion that nurture was ultimately the winner since it could suppress and keep latent through powerful social and political forces and control what naturally lies within a person, and by the same token, it could in different circumstances open and unlock the talents of that same person, and with one tidal wave take him far and wide to discover his talents, his thoughts, his fears, and such people can eventually and inevitably evolve to the highest level of psychological development, or as truly “self-actualised” the summit of Maslow’s hierarchy of needs, by this marriage between nature and nurture ..
.. but the Dobermann has shown me something quite fascinating , which is that although the same principles apply to a certain extent , nature is much much more powerful, I have never seen character,  morphological, and behavioural traits so closely replicated through generations, and I was shocked, yet fascinated and delighted to see nurture being struck down in a single strike and sometimes totally eradicated in one simple swipe ..
.. so years later now I look at this same question with very different eyes , my goggles have been coloured and tinted anew by the Dobermann who never ceases to amaze, amuse, enchant, excite, surprise, even bewitch me, but ultimately to teach me ..
.. I revisited Nietzsche’s ‘Thus spoke Zarathustra’ after having named Zary almost 8 years ago, and studied and re-studied that writing which I consider now almost as my Bible, I have also looked and tied it to the original ancient Persian religion Zoroastrianism as did Nietzsche himself and which to a degree formed its basis, and to a certain extent meant for it to be understood within the context of this monotheistic faith. Moreover,  despite the claim that ‘God is dead’ Nietzsche’s writing bares a style or poetic meter if you like that can resonate the biblical scriptures in the ombré melodic undertones of the philosophical work ..
.. And .. not only did the Dobermann bring me back to Nietzsche, but also close to nature, which Nietzsche believed to be so important and crucial to realising oneself as a ‘superhuman’; the highest state of being in which man has overcome himself and reached a state of freedom and creativity, free from the influence of society and in harmony with the deep, creative, immortal spirit of existence  .. ..
.. well all of this made my life take both a physical and intellectual turn since previously I was very much of the Huysmans “Against Nature” school of thought .. Moi; the die hard aesthetic who could not remove herself far enough from nature, turning only to artifice, the entirety of Nature hateful to me, violently opposed to the nature-worshipping Romantics..
.. I think the only catalyst strong enough to slowly open my eyes to the importance and beauty of nature in my intelligent life was the Dobermann, and not just any Dobermann, but the one that is true to his nature and purpose in life, for me, ultimately the utilitarian Dobermann, without that affix he cannot properly do his service as a Dobermann and so loses his purpose and is no longer a Dobermann in essence, and without his essence he could not have taught me all that I have learned..
.. and so I drift and ramble, BUT, while the imagination is free to love it can create, .. for “I love him who labours and invents, that he may build the house for the superhuman, and prepare for him earth, animal and plant” (Nietzsche: Thus spoke Zarathustra)
.. you see by the connection with his human he can do his service, and by doing his service he can tie the string that connects him with his human, and that string in turn “ to the earth, that the earth of the Superhuman may hereafter arrive.” (Nietzsche: Thus spoke Zarathustra)
.. and while the Dobermann is true to his breed, which is deeply and profoundly tied to his connection to the human, to watch him, to guard him, to protect him , to love him .. and to show us the earth, to teach us virtue, for he  “reserves no share of spirit for himself but wants to be wholly the spirit of his virtue: thus walks he as a spirit over the bridge” .. for the sake of his virtue, he is willing to live on, or live no more” (Nietzsche: Thus spoke Zarathustra)
.. and so ultimately, to my spiritual delight and abatement, the Dobermann by doing this multifaceted service can also thus diligently teach us to be “a free spirit and a free heart”
.. and, the continuous, never ending, painstaking lesson is that
“One repays a teacher badly if one remains nothing but a student” and that can only be transcended through love , which is the soul of genius .. love, love, infinite love ..
♾♥️ Infinity Amoris il Dobermann